Addicted to your cell phone? You may be harming your health

New studies by the acclaimed chief of the National Institute of Drug Abuse, psychiatrist Nora Volkow show that just 50 minutes of cell phone radiation excites the brain. This important finding strengthens the need for a major research program on cell phones and health, for revamping approaches to setting standards, and for putting warning labels on cell phones.

Writing in the February 23 issue of The Journal of the American Medical Association, a team of researchers led by Dr. Volkow, found that cell phone radiation significantly affected brain function and metabolism of glucose–the brain’s main fuel–in those parts of the brain that received the most cell phone radiation. 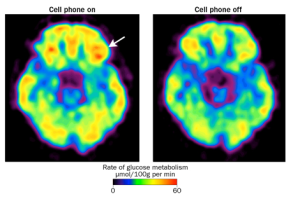 These findings raise serious health concerns
Ronald B. Herberman, M.D., chair of EHT’s Board and a renowned cancer biologist and physician, indicated that this work offers an important clue about the ways that cell phone radiation can alter the brain and also shows why it is appropriate to take special precautions with cell phones today.
“This stunning report indicates that even short-term exposure to nerve cells from cell phones can increase glucose in the brain,” said Dr. Herberman. “We know that increased glucose also occurs with infections and other inflammatory processes, and leads to the production of potentially damaging reactive oxygen radicals that can alter the ways that cells and genes work.”

According to Lloyd Morgan, Senior Science Advisor to EHT, anything that disrupts the natural metabolism of such critical areas in the brain is worrisome. “The areas of the brain that had increased glucose in the JAMA study are involved in thinking, sensing and decision making, including repression of antisocial behavior,” he explained.

Sharing Morgan’s concerns, EHT scientific advisor Richard A. Stein, M.D., Ph.D., said, “As glucose is the sole energy source in the brain under normal dietary conditions, and there is an absolute requirement for glucose during synaptic transmission in the nervous system, the results of the current study emerge as even more significant,” Dr. Stein said. “Of course, we do not know whether the changes in glucose metabolism represent the primary perturbation, or whether they occur secondarily, as a response to some other disturbance–such as the activation of heat shock pathways, which was reported to occur by several independent groups in response to non-ionizing radiation.”

Cell phones may change more than just glucose
Previous work from Prof. Dariusz Leszczynski‘s group at the Finnish Radiation and Nuclear Safety Authority, published in 2008 in BMC Genomics, involved a human study where punch skin biopsies were taken from the forearm of 10 human volunteers who were exposed for 1 hour to cell phone radiation. Study has revealed that the expression level of 8 proteins was changed upon exposure, and 2 proteins were changed in all volunteers, suggesting that protein expression changes might occur in response to RF exposure.
Writing in the journal Nature Neuroscience last month, neurobiologists at the California Institute of Technology showed that very weak varying electric fields affect the thinking, resting or sleeping brain.
We need better cell phone standards

This new work, combined with studies carried out by Henry Lai, Allan Frey and others in the past three decades and documented in my new book, Disconnect: The Truth About Cell Phone Radiation, What the Industry Has Done to Hide It, and How to Protect Your Family (Dutton, 2010), reinforces the need for revamping our current approach to cell phone safety.
Cell phone standards assume that no biological impact of microwave radiation from cell phones can occur without a detectable change in temperature. In fact, this JAMA study used phones with a Specific Absorption Rate (SAR) of less than 1 W/kg for 50 minutes and found significant increases in brain glucose–the sugar that provides the brain’s main source of energy.

The current study shows, along with other studies, that there are additional concerns related to cell phone use, besides tumors. Tumors are just the tip of the iceberg, but their development is preceded by years of other biological perturbations that have profound medical relevance–and this study confirms that significant biological changes occur after relatively brief exposures such as those that take place daily with the world’s five billion cell phones.

Repeat after me: more research is needed

Could the stimulating impact of cell phone radiation to boost brain energy explain some of the growing addiction many of us feel for our phones? That is one of the many research questions that should be addressed.

Dr. Herberman adds that the JAMA study “should stimulate many biologists to perform in-depth studies to determine the consequences of such changes in nerve cells or other bodily cells in the region of the radiation. We need to develop a better understanding of how radiofrequency radiation might contribute to increased risk for brain tumors as well as other alterations in brain functions.”
Dr. Stein echoes Dr. Herberman’s call for more research: “One thing is certain–the current study clearly reveals changes in a pathway that is essential for brain energy metabolism and synaptic transmission, and is intimately interconnected with other pathways that fulfill fundamental roles in biological systems. The Volkow study is an important contribution to public health.”
EHT is working with experts and governments in a number of U.S. cities and states, and in Finland, France, Israel and other countries around the world, to encourage a major independent research program on cell phones.

While that research is being carried out, EHT encourages simple precautions to reduce microwave radiation to the brain and body, such as those recommended by EHT chair Herberman in 2008 and now endorsed by a number of governments and experts around the world. Phones should be used with headsets or speakerphones and not kept directly on the body, and children should take special care not to have direct exposures.

EHT is not alone in this. Based on the growing evidence from laboratories and epidemiologic studies, two leaders of the WHO Interphone study on cell phones have recently broken ranks and are now calling for such precautions to be taken broadly. They note the growing biological evidence that microwave radiation from phones has impacts and that epidemiologic studies find increased risks of brain cancer after a decade of heavy use.

Professors Elisabeth Cardis and Siegal Sadetzki have urged that it is prudent to reduce exposure by simple means at this time, ranging from using speakerphones and headsets to reducing call time and children’s use of phones generally.
“There are now more than 4 billion people, including children, using mobile phones,” they write. “Even a small risk at the individual level could eventually result in a considerable number of tumours and become an important public-health issue…until deﬁnitive scientiﬁc answers are available, the adoption of such precautions, particularly among young people, is advisable.”
Reports concluding that cell phones are safe are premature
A recent widely publicized piece in the journal BioElectromagnetics concluded that because the U.S. and U.K. do not currently have a brain tumor epidemic (from 1998-2007) and cell phones have been in use for a decade, therefore cell phones are safe and there is no need for precaution.

Regarding this study, Allan Frey, a well-known expert in the field of bioelectromagnetics, noted the fallacy of the argument:
“It is well established in the scientific literature that generally a cancer is not seen until 10 to 30 years after the exposure to an agent. In addition, the radio frequency-biological literature shows that cancer is not seen until at least 10 years after the exposure, which is consistent with the rest of the scientific literature.”

In criticizing this study, Frey points out, “The authors analyzed data on brain tumors gathered before most of their study population owned a cell phone. Also, most of their population did not have a cell phone for more than five years. Thus, the authors knew or should have known, that if cell phones induced or promoted brain cancer, that their study would not have shown it. Yet they did the study and concluded in their paper that their study showed that there was no need for ‘…interventions to reduce radio frequency exposure from mobile phones’ that are used today.”

To conclude that cell phones are safe misreads the science and misleads the people.

6 responses to “Addicted to your cell phone? You may be harming your health”